If the Saints march on to win their second Super Bowl title in franchise history, the drive in the NFC Divisional Round vs. the Philadelphia Eagles will take on legendary status in New Orleans.

The numbers are simply staggering: 18 plays, 92 yards in 11:29, capped off with a two-yard touchdown from Drew Brees to Michael Thomas.

The mammoth drive gave the Saints their first lead of the game (17-14) at the 1:40 mark of the third quarter.

The #Saints‘ 18-play, 92-yard touchdown drive took 11:29 off the clock – the longest scoring drive by time in a playoff game since the AFL-NFL merger in 1970 ⚜️ pic.twitter.com/4xXwshSRvu

The unofficial tally was an insane 21 plays, 112 yards when taking into account the penalties (three by the Saints, one by the Eagles) according to Deadspin. One of the Saints’ penalties (holding) wiped out a 46-yard touchdown reception by Alvin Kamara from Taysom Hill on the 11th play.

The Eagles raced out to a 14-0 lead at the end of the first quarter. However, the Saints rallied to score the game’s final 20 points to move within a victory of returning to the Super Bowl for the first time since defeating the Colts in 2009.

The Saints will host the Los Angeles Rams at 2:05 p.m. (CST) on Jan. 20 (FOX) in the NFC Championship Game for the right to advance to Super Bowl LIII. The Rams beat the Dallas Cowboys 30-22 on Saturday night.

The Saints will host the Rams next Sunday for the right to go to the Super Bowl!#HomeInTheDome pic.twitter.com/DjIgf0YVVn

The Kansas City Chiefs host the New England Patriots in the AFC Championship Game on Jan. 20 (CBS) at 5:40 p.m. (CST).

Here’s the full breakdown of what’s being dubbed the “Forever Drive”: 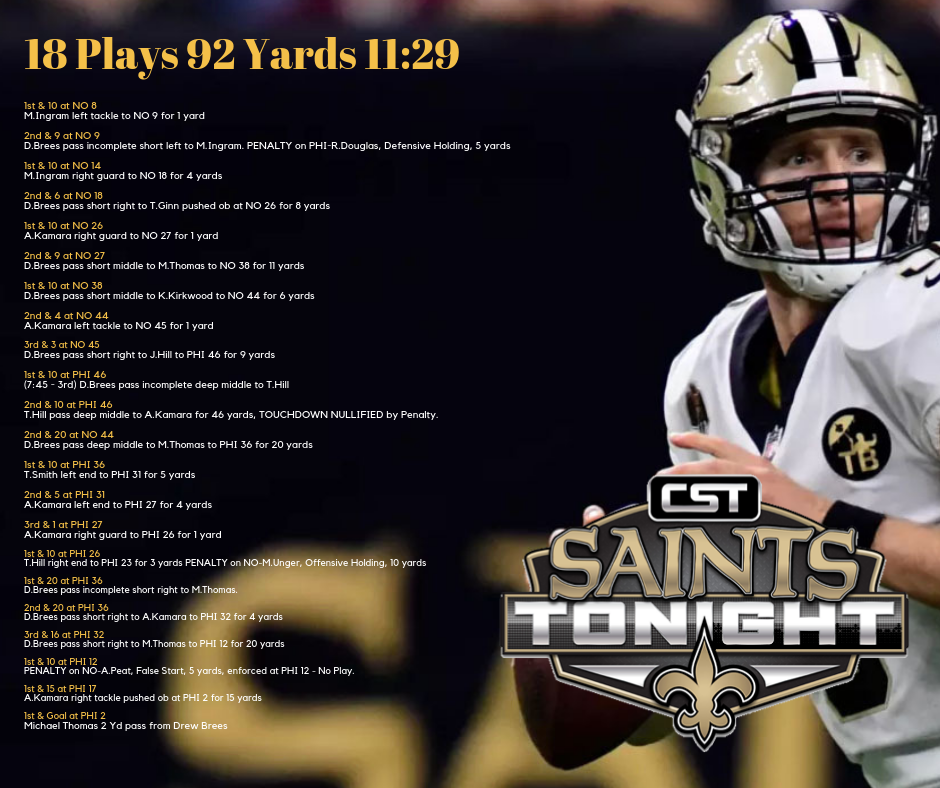 Afterwards, Brees told CST’s Mike Nabors in the post game interview that he doesn’t recall ever being a part of such a prolonged drive.

“I don’t think so. It was long. It felt long. When I got back to the sideline I was looking forward to looking at the [Microsoft] Surface to see how many plays…You look up at the clock and you see that it says maybe a minute left in the third quarter and you go ‘Wow, where’d the time go?’ That’s a good thing,” Brees said. “At the end of the day I think we had the ball close to 38 minutes in this game to their 22. When you talk about time of possession, controlling the clock, controlling the line of scrimmage, we did on that drive.”

The drive had a debilitating effect on the defending Super Bowl champs while injecting the Saints with a boost to close out the victory.

With the Rams coming to town for a rematch, the drive inspires confidence that the Saints have the moxie to claim the NFC crown.

“I think that kind of blew it open for us. I think that really wore them down,” Brees said. “It really gave our team and offense a lot of momentum.”

In the French spirit of the Bayou, Laissez les bons temps rouler. The purple and gold confetti has fallen and the glorious trophy has...

Loyal young LSU fan from Alabama rewarded with tickets to CFP title game Jan. 13, 2020 will be an unforgettable day for Colton Moore. The 9-year-old...

Something's going to give on Jan. 13 in what figures to be a riveting clash of two tremendous units. The national championship game from New Orleans will be a fascinating battle between the No. 1 offense (LSU) and the No. 1 defense (Clemson) in the country.

Reporter Carley McCord, 30, tragically passed away on Saturday Dec. 28, 2019 during a plane crash in Lafayette, Louisiana. The two-engine Piper Cheyenne plane crashed into a post office parking lot one mile west of Lafayette Regional Airport around 9:22 a.m, according to The Washington Post. The flight was headed to Atlanta for LSU’s matchup vs. Oklahoma in the semifinals of the College Football Playoff.