The NFL’s all-time passing yards record now belongs to the pride of Who Dat nation.

In front of a raucous crowd at the Superdome, New Orleans Saints quarterback Drew Brees vaulted past Peyton Manning (71,940) into the top spot during the Monday Night Football matchup vs. the Washington Redskins. (CLICK HERE for our exclusive post-game interview with Brees.)

Brees’ feat is amazing on its own but it’s even more astonishing when you think outside the box.

CST had fun some with the measurements to put the accomplishment into extra perspective. 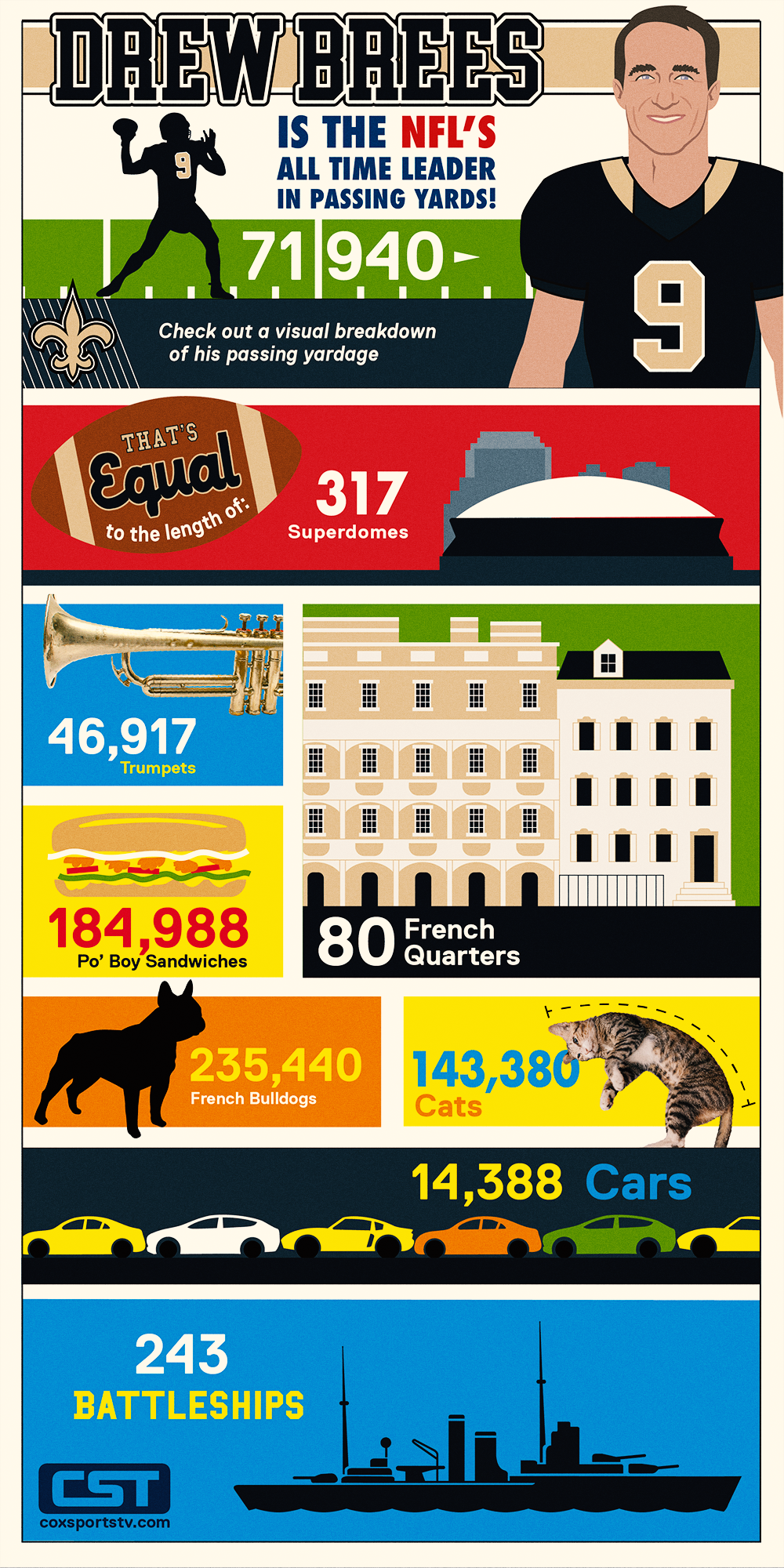 The mark Brees surpassed is stunningly equal to:

Truly remarkable stuff, especially when considering the expectations for Brees were relatively low coming out of Purdue. Due to concerns about his stature and arm strength, the 6-foot Brees was a second round draft pick by the then-San Diego Chargers in 2001.

After making the Pro Bowl in 2004, Brees tore his labrum in 2005 and the Chargers committed to Phillip Rivers as their quarterback in 2006.

In 2006 free agency, the main contenders for Brees were the Saints and the Miami Dolphins.

The Dolphins, reportedly scared off by Brees’ injury, pulled their offer and instead signed Daunte Culpepper, who ironically only played four games with the team due to injury.

Meanwhile, the Saints rolled the dice on with a 6-year, $60 million deal and Brees has blossomed in the Bayou.

In 2009, the future Hall of Fame member guided the Saints to their first Super Bowl title by defeating Manning and the Indianapolis Colts.

In his dozen years at the helm in New Orleans, Brees has a Super Bowl MVP, 10 Pro Bowl appearances and is the NFL’s record holder for career passing yards, career completions and highest career completion percentage.

After witnessing history tonight, the answer to Who Dat is a quarterback worthy of being in the G.O.A.T. discussion.

Cox Sports Television, the Gulf South Sports Leader, will call the Hogs with encore presentations of Arkansas Razorback baseball and women’s basketball. Replays begin Saturday with a look back at a 2008 win on the diamond from the Domino’s Pizza Classic on the campus of Texas A&M.

Professional baseball is making a return to Cox Sports Television. The Constellation Energy League based in Sugar Land, Texas, features four professional baseball teams made up of former major leaguers, former first round pics and players that at least reached the Triple-A level in the minor leagues.

Cox Sports Television returns to the baseball diamond this week with New Orleans club baseball. Every Wednesday in June, CST will feature the NOCA...